To: the potential viewers of STONEWALL 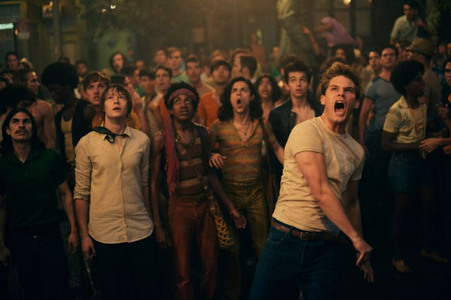 To all considering watching the newest whitewashed version of queer history,
It is time that black and brown transwomyn and drag queens are recognized for their efforts in the riots throughout the nation. From the preview alone, we know that will not be happening . Majority of characters casted are white actors, cis men play the role of transwomyn, and folks who began the riots do not seem to be credited with such revolutionary acts.
WE ARE CALLING A BOYCOTT OF STONEWALL. Do not throw money at the capitalistic industry that fails to recognize true s/heros. Do not support a film that erases our history. Do not watch Stonewall.

Tell your own history! Use social media to recall what you know to be true of Stonewall. Film your own short films. Make videos, write poems, sing songs. CONTINUE TO TEACH TRUE HISTORY.

OUR HISTORY WILL NOT BE WHITE/CIS-WASHED.

History classes throughout our nation have built a reputation of instructing young generations that white, straight, cis folks are the saviors and founders of this land. Wrong. We were taught that light-skinned people are the goal; the goal to assimilate to. Wrong. We were also rarely taught about queer history, but when we were, it probably revolved around white cis gay men. Wrong.

This film is no different that the history classes that are serving a disservice to every potential viewer. From the previews alone, queer folks have gathered that the centralized character is a white cis gay man. (WHY?) From the previews alone, queer folks have gathered that not many people of color are even in the film. (WHY?) To make this short, we have also gathered that white folks are being credited in throwing the brick, starting the riots, starting the "gay liberation front" and also capturing the heart of a light-skinned transwoman. (Of course we all fall in love with the white saviors. WRONG.)

How it will be delivered

This is a constant effort to have our voices heard!

If you have questions regarding our next steps, please contact:
Juniperangelica Cordova, transwoman of color

TOGETHER, we will win!

20,000 and still strong! "We have nothing to lose but our chains!" -Assata Shakur

17,000 signatures standing together, against the whitewashing and ciswashing of our history!

200+ SIGNATURES IN LESS THAN AN HOUR. KEEP THIS GOING, WE WILL NOT HAVE OUR HISTORY ERASED (AGAIN).