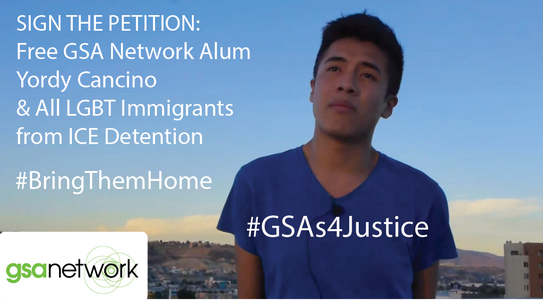 Yordy Cancino is a leader who worked to transform his high school and his city of Los Angeles as the Gay-Straight Alliance (GSA) club President at Animo Jackie Robinson High School. A GSA Network alum from the class of 2011, Yordy has lived in California since he was a child and gone to school here since elementary school.

Now, Yordy is being held in detention, not allowed to return to the home he worked so hard to make safer for all LGBTQ youth.

As a GSA president, he was a trained leader who graduated as salutatorian and would have qualified for higher education. Unfortunately, officials in his high school did not provide him information about college opportunities, including the Dream Act that grants students in CA the right to higher education. While in California as a student leader, Yordy regularly spoke out for LGBTQ rights, but because he was unable to attend college or attain a job, he returned to Mexico where he faces violence and cruelty for being gay.

Hoping to return home and escape homophobic violence, Yordy took the courageous step of placing himself into immigration custody and asking for humanitarian parole and asylum. Yordy along with other LGBTQ Dreamers are now in immigration detention in San Diego facing deportation.

GSA Network alum Yordy Cancino has devoted so much of his life to enriching this country with his courage and leadership, making it a safer, more just place for LGBTQ youth. Now Yordy and fellow LGBTQ immigrants in detention are the victims of homophobia, violence, and our broken immigration policy. Yordy, like all LGBTQ immigrants in detention, deserves to come home to the United States and pursue his dreams of higher education.

We call on President Obama to be a champion for all LGBTQ youth and exercise discretion in granting the asylum requests for Yordy Cancino, and all LGBTQ immigrants who seek protection within our borders.

Petition is successful with 3,332 signatures

Incredible news: Yordy's credible fear request has been granted! When Yordy went before the asylum officers reconsidering his case, his lawyer had your signatures in hand -- and the officers decided to free Yordy! Our efforts, from delivering the petition in D.C. to rallying in L.A., played a role in that decision, but Yordy is not yet released and we are in it until the end. He still needs us.

He must raise $7500 for a bond to get out of detention. Mario has set up a donation page to help Yordy's family overcome this last barrier and bring him home: https://www.youcaring.com/freeyordy.

Last Thursday, we successfully delivered the petition to #FreeYordy to the White House, Immigration and Customs Enforcement (ICE) headquarters, and a local ICE office:
http://theseattlelesbian.com/immigrant-youth-activists-unite-to-demand-immediate-release-of-yordy-cancino/
http://www.laprensaenlinea.com/noticias/noticias-historias/20140425-inmigracin-piden-liberacion-de-jovenes-lgbt-detenidos-por-ice-en-otay.ece
Yordy is still in the country, but also still in detention. He has another hearing this afternoon, where he will present your signatures to the judge.

With Mario on his way to DC right now to deliver the petition, we received some bad news in Yordy's case: he saw a judge this morning who denied his appeal. For Yordy to stay in the country now, we need his prosecutorial discretion to come through ASAP. Please make a call this afternoon to ICE at 202-732-3000. Here is a a script you can use:
"Hi my name is _________________ and I am calling to urge ICE to grant Yordy Cancino (A# 206-273-497), prosecutorial discretion in his case, so he can reunite with his mother and communities. Don't deport him! Yordy is a California LGBTQ Dreamer who has made Los Angeles a greater city for many young students. He graduated with honors from high school and has so much to offer. LA is his home. Let him come home already."
No matter what else happens today, we will deliver your signatures in DC and rally in LA for justice for all LGBTQ immigrant youth tomorrow! Please keep spreading the word and sharing the petition.

ICE has made up excuse after excuse to delay Yordy’s case and keep him in detention. I think they’re hoping we’ll forget about him. But Yordy’s family, supporters, and GSAs won't let that happen.
This Thursday, I am going to DC to deliver your signatures directly to the White House. I will tell President Obama that Yordy is one of many undocumented youth leading GSA clubs and making schools safer across the country – and we’re not giving up on any of them.
The same day I’m standing in front of the White House, supporters will be rallying outside the federal ICE building in Los Angeles, delivering the petition there.
We must do a MAJOR push for signatures in the coming week, so that I can tell the President that 4000 #GSAs4Justice stand with me! Please share this link with your friends and with other local groups – school clubs, LGBT centers, youth organizations – that value the leadership of young people in GSAs!

ICE is feeling the pressure. After being told several excuses 3 days in a row ("the recording system is down", "your file cannot be found", etc) to prevent him from resuming his life in Los Angeles and the country he has helped build, Yordy will be facing the judge again today at 1:00 pm. Keep making calls 202-732-3000 to #FreeYordy.

Yesterday, without warning or explanation, another undocuqueer youth who entered detention with Yordy through the #BringThemHome campaign was deported. After having his court date postponed twice due to strange reasons such as being told that his file was lost, Yordy could be deported this afternoon. Please take 30 seconds to make a call now asking ICE to release him!

SAY: "Hi my name is _________________ and I am calling to urge ICE to grant Yordy Cancino (A# 206-273-497) prosecutorial discretion in his case, so he can reunite with his mother and communities. Don't deport him! Yordy is a California LGBTQ Dreamer and GSA leader who has made Los Angeles a greater city for many young students. He graduated with honors from high school and has so much to offer. LA is his home. Let him come home already."

Good news! Yordy's again been given more time to appear before the court. Please keep the petition and calls going so ICE knows we won't forget our undocumented brother!

UPDATE: Yordy will be facing the judge today sometime between 1pm and 4pm today. Let's not allow ICE to take him away from us. Let's all come together and call ICE at 202-732-3000 and say, "Hi, my name is ____________ and I am calling you to urge ICE to grant Yordy Cancino (A#206 273 497), our California LGBTQ Dreamer, prosecutorial discretion in his case so that he can return home with his mother and his communities. He's a great asset to California. We need him back. Let Yordy come home, please."

UPDATE: good news! Yordy's court appearance has been extended to Monday. We have the weekend to keep gathering signatures and put more pressure on ICE. And Yordy's mom sent us a message for all of you: "Thank you GSA members for all your support. I thank you for all you're doing for my son. God bless you. Let's keep on fighting for justice."

We've learned that Yordy is going before a judge today -- meaning he could be deported as soon as today, on GLSEN's Day of Silence! Read more about it and share with everyone you know participating in Day of Silence: http://www.gsanetwork.org/news/blog/yordy